Dallas has spun some stories far more interesting than the Captain and I am enthralled once again of colorful accounts too far fetched to write from my imagination, no matter how many bottles of vino I drink before settling down to write.

Dallas, as you may have read, is the gentleman who was going to allow me to board my mini cow on his ranch. But do to the fact, I do not trust him enough not to turn my mini cow into sliders and ribs, and the fact that while its fun to think of owning a mini cow...its still a cow and I have enough issues with my cat's litter box, I have quickly put mini cow ownership on a reality halt.

The story of Testes the fish started a long time ago. Dallas was camping with friends near Garner State park, along side a large lake. In the darkest of evenings as he sat pondering his adulthood, a fish came out of the water and talked to Dallas. I am not at liberty to discuss the conversation because, quite frankly, I was scoffenheiming the reality of the fish speaking, that I failed to hear what Testes had actually said to Dallas.

Now, Dallas swears he was not smoking anything funny that night and from knowing him not to be one to take a puff on the canibus leaf, I have to just assume he had a crazy moment.

After discussing worldly insight with Testes the fish, Dallas went back to his friends only to discover a statue named 'Mauie' perched on top of a rock. Apparently, Testes left him the gift.

I am not sure if it was Testes or Maui that brought on the following events but according to Dallas, its all true.

I know you are probably asking yourself right about now, where do I meet these guys. Internet dating sites? Where else?!!

Anyhoo, back to crazy!

Then one night, while out drinking, Dallas ran into a a few women that said they were Wiccan and could cast a spell to protect him. And sure enough, Dallas went for it and a full blown wiccan
party entailed and candles were burnt and voila!!

Ever since then, Dallas has been free from 9/11 turmoil but I still have no intention of ever spending a September with him, considering I have not had the same spell afforded to me.

With the Captain and Dallas at the helm of my freindship list, you can certainly understand why I would find dinner parties with talks of visits to St. Barts and the economic crisis with normal peeps, a total bore.

Every year I look at my Victoria Secret bikini log, I think of 'The Sunscreen Song'. The song was created by Baz Lurhman but it was actually an article, written by Mary Schmich, for the Chicago Tribune in 1997.

Spring Break is about to hit Texas and I think of all the young hotties that will bake away in the sun not realizing that when they hit my age, they will wish they didn't (I know I am) so I, being in a generous mood tonight, have decided to offer up a social contribution. I am bringing out the decade old advice and dispensing it for future genz.

As for the videos of lude acts that will inevitably hit SEXtube....not my problem. Mamma and Daddy should have done a better job raising you!!


The Blonde never bakes!!
No comments:

Of all my friends, Captain Caribbean has to be my all time favorite. I am so in love with his story telling that I can't wait for margaritas and a moon to listen of his tales with exotic women.

Far from the exotic shores, the Captain settles his sails for titty dancers, latin persuasion hotties, and stress reducing rituals with happy endings, which sadly enough for him, came to an abrupt halt when a sting operation shut his Mamma San down.

Tonight's plate of forbidden fruit was laid out with tales of the colorful and offbeat religion of santeria. 'Santeria' also known as Regla de Ocha, which is spanish for 'one who works the spirits' had my blonde arm hairs in a prickled state.

The Captain has a pretty little lass who has become an Iyalorishas (high priestess) and she invited him to a party celebrating her deceased Mother. The party was hidden behind an unassuming store filled with santa maria candles and religious artifacts on the east side of town where white skin and a Range Rover Sport with pop daddy hot rims and super sport upgrades is a beacon for paroling squad cars looking for a major drug bust. Even with the heat burning his bumper, the Captain did not sway from his invitation.

The Captain was greeted by a very large dark cuban man that ushered him to a large room behind the store. There he was greeted by his twenty something treat, 3 chickens in a cage, an albino in a pimp daddy suit, and a white dove who sat above an altar table of offerings. Along the walls was an endless array of congo drums and spirited musicians banging rhythmically away.

The white dove was the encapsulated spirit of the deceased; the albino was the new sugar daddy of the priestess; the cuban fellow was just a bouncer, and the 3 chickens now have their heads on a milk carton asking if you have seen them.

The Captain enjoyed the party and the only odd thing he was asked to do was smear a cucumber on his face and lay it on the table beneath the dove. I googled this ritual and it is called 'cleansing of palo mayo'. The Captain was being cleansed of bad spirits that have him plagued for a life long sentence of bachelorism and non-monogamous relationships.

This chica, the priestess, has been on the captain's tail coat to move in and settle down, like any woman interested in a man would want, but I have to applaud her bravado and the great extent as to which she will go through to cure my friend of his philandering. A blonde chick would never be so creative.

After slurping our frozen margs down in a casual pace, I left the Captain behind thinking I would visit him for a few more rounds at the hacienda, but something stopped me this time. Perhaps it was the thought of Mother dove sitting on his cucumber that had me head straight for home instead.

The Blonde was spiritually guided!!
No comments:

How utterly apropos is it to find this lingering outside my door as I left to deal with the bank? 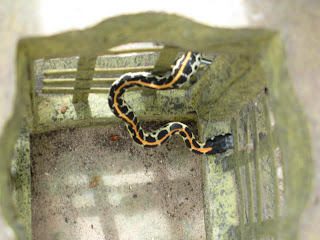 While banks, on a whole, are as slithery as my new found friend, their employees are not hideous creatures and are willing to help a blonde out. All my charges were reversed by a super handsome bank manager called Eduardo.

The Blonde is back in the garden of green!!!
No comments:

I have a plethora of funny and fab tales but unfortunately today is the day I have to clear up some bank fraud with my account and prepare my taxes, so needless to say, my humor is on hold.

Bank of America is a good bank but they are a sneaky little outfit sometimes. Twice they have double debited items and if it were not for my deliciously low funds, I would not catch their errors.
Due to bounce fees without a negative and without transactions to account for it, I have caught them once again.
I can only wonder how many people don't catch banks accounting glitches and pay the $35 fee thinking they are at fault. I guess it only becomes a problem when billions of dollars are at stake.

In times of economic struggle I understand thievery is on the rise but its easier to spot your missing bike than it is to see how fraudulent accounting practices end up hurting the average blonde and everyone else with darker shades of hair.

Banks and credit card companies are the new Bonnie and Clyde of our times. They may not carry guns but they are definitely shooting off the hand that feeds their greed.

The Blonde is policing banks today!!
No comments: 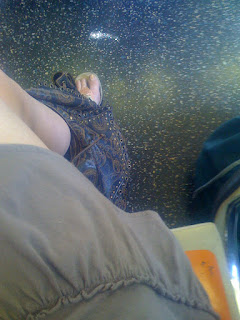 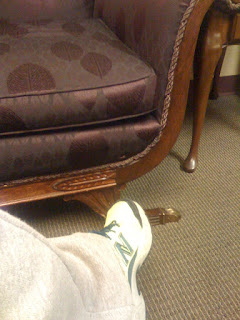 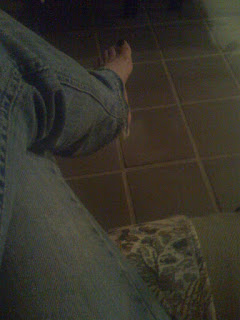 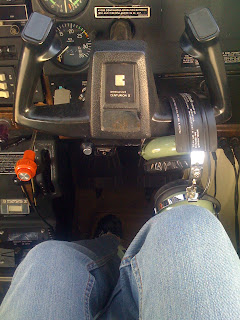 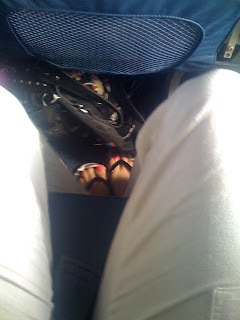 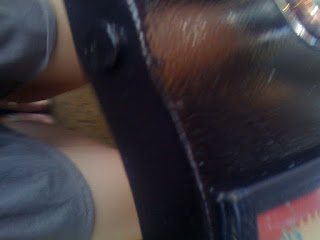 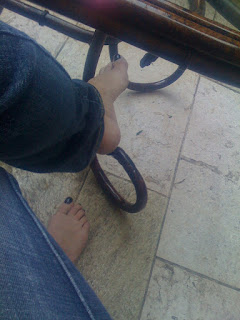 My iphone has spawned into a voyeur. It seems the sneaky shutterbug, has a thing for my feet. Every time I try to use the camera feature for a quick pose, my trusty little cell uses its little camera icon button to deceive me into a foot photo.

I am trying hard not to judge my iphone but it is a little creepy if you ask me. I was thinking about putting my iphone into therapy but I can't find a Doctor willing to work with the little guy.

I think therapy for my iphone and my electronics would be appreciated. I could get my toaster to stop burning my toast over feelings of being inadequate next to the microwave. A therapist could have told me to move it to the counter near the wimpy can opener to give it positive self image.

Maybe I can find some alternative therapy like a hypnotist that would be willing to work with my iphone's fetish, my can opener's desire to squirt tuna juice, and my alarm clocks unwillingness to reset itself to snooze a few times instead of making me do it.

The Blonde has some ill thoughts!!
No comments: 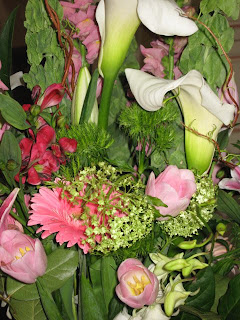 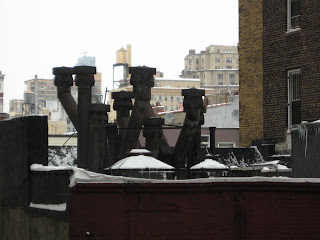 The Blonde is under the weather!!
No comments:

Dallas wants to raise mini cows and turn them into sliders at your local brew pub.

And while I love sliders, especially with cheese...I do not want to think that one of those tasty treats had a name, or was a pet!

Dallas can have mini cows for milking only!!

He can evaporate the milk, bottle it in cute glass baby bottles with pink ribbon, and sell it as 'mini moo-moo milk bath' in exclusive boutiques in New York and LA.

But he will not be raising them to send to the butcher.

How can you even think of looking in those big mini cow eyes and telling them they are going to be baby back ribs at Chilis?! 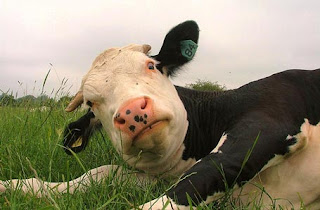 Blondes are chickening out!!
No comments: