I was contemplating going back on the dating sites and picking out grossly inflated profiles and picking off the little liars Dexter style. Albeit that would interfere with my plans to graduate from law school if I get caught. But on the bright side, I could defend myself in court if I ever get caught and I could play the Sharon Stone's character in Basic Instinct.

Why would someone write about killing and then kill in the exact manner that she writes?

I think just a well plotted smear campaign against the atrocity of serial daters on Match should do the trick in warning women and men that they could be victim to assholedness.

My last date of last year involved a bipolar freak who stole my brand new pair of union jack printed jeans I ordered specifically from London, at a pretty penny to me. 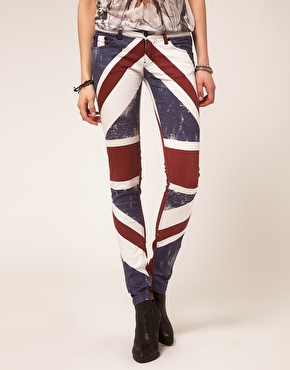 Why did he take my pants? He took them as leverage, saying that I owed him a $2000 for the two weeks we went out. The food and drink tab he wanted repaid.

I am 5'9" and 128 lbs. If I could eat and drink a thousand dollars worth of food in a week; I would be extremely thrilled with that kind of wicked, awesome metabolism...

but that was not the case.

We went out a few times and maybe a couple hundred greenbacks were left at the restaurants but the rest of the time he and his brother cooked dinner and lunch with amazing amounts of carbs.

They consumed amazing amounts of scotch and wine.

I ate very little and drank my Shiner. Hardly a thousand dollar pallet.

He has my pants and I ordered a new pair.

But do not think for a minute that I did not dream up fabulous ways of breaking into his house with a taser gun and waking him up in the middle of the night to scare the pants right off of him. Alas, it was only dreaming. In reality I had to succumb to the fact that he probably gave my pants to his next victim.

I wonder what he will take from her?

The girl before me lost her antique make-up table that he kept and let his new girlfriends use but she lasted 2 months. I am glad I got out early and off easy.