Almost an Officer, Always a Gentleman 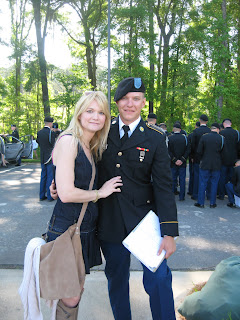 Only one man deserves a 30 hour road trip from me and its the Boo!!

So its funny that a porker named Albert was shocked that I was not going to move to Columbus Georgia and set up shop with him.
Seriously dude..what did you think would happen?!

I didn't drive 15 hours to Georgia to pluck some unsuspecting guy out of the hotel bar to play house for a weekend.

I was there to see my son!

I have a plethora of hater texts from this guy simply because he failed to rock my world. I am sure his shtick of being semi-retired and offering cuban cigars to the crowd works on girls in a military town but for those of us who are a little more mature and have seen a lot more of the world...

If I end up in Columbus, Georgia...just shoot me now!!

Take out your AK-47 military issue rifle and blow the blonde off my shoulders.
The funny thing about a military town is the machismo that runs rampant and evry guy is trying to bag the new girl in town.

I loved every moment when the 30 something Captains would hit on me and the minute I said I was in town for my son's graduation, they less than politely just up and turned away.

I felt like the twenty year old with a baby all over again. Back in the hay-days of my youth guys would hit on me and when I told them I was a single Mom with a baby, they turned a 180 back in the other direction...its nice to see some things don't change!!

The thirty hour drive was excruciating but looking back on it..I would do it over again in a heart beat because there will always be one man in my life worth the dump truck supply of coffee and twizzlers I endured on the road.

The military isn't the only thing making great men.