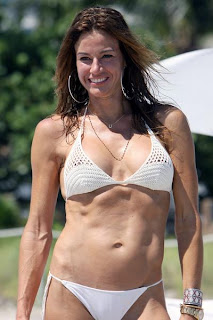 I just watched the preview of Kelly Bensimon flirting with the journalist from Playboy. She is so nervous and acts so goofy its almost embarrassing to watch if it were not just as harming as hell.
I think its the first time they show Kelly not being somewhat moronic. Of course I am speaking of her stand on fur. Wearing or not wearing fur has nothing to do with being American. And PETA is totally against fur and fur trade because of the heinous butchering treatment of the animals.
I have a rabbit fur scarf that on occasion I wear. I bought it at a second hand store but still I think about PETA every time I wear it, which is not often, and then I donate to an animal right cause.
Anyhoo,
Kelly had her pics done for Playboy and yes at 41, its a big deal to be asked but just for the record, a crap load of airbrushing is going on.
I look at Kelly and think her body looks older than 41.
And so to the point.
Don't wear fur unless its faux.
DROWN YOUR BODY IN SUNSCREEN.
You can tone muscle, you can fix cellulite but sun damage is a forever bitch.
And...
Put down the white wine!!
There is a reason why white wine's nickname is 'ripple'. It ripples the mid section and toxifies the body with more sugar than a can of coke.
Sugar ages the skin almost as badly as sun damage.
The Blonde SPFs on a daily basis.