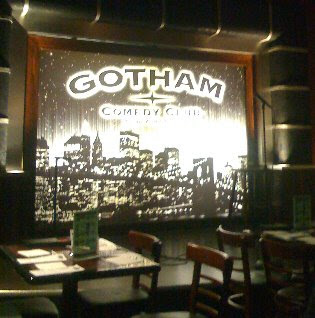 Now I should know better than to drink a 10 oz carafe of saki and then mosey on over to a comedy club on a Tuesday. I am fairly certain if you are playing a gig during the earlier part of the week, you can't possibly be any good and the fact that my mouth was feeling all warm and fuzzy inside, not caring what anyone thinks if it decided to speak up in the middle of the show, it could have been a cocktail of heckling hell for the stage weary.

The MC was not funny

The first guy was even less funny

...the second guy, who was from Austin, was even less funny than the MC and the first guy, making him the head tool of the unfunny cadet club. And he had the audacity to get upset with me for cheering him on. All I said was.....

Apparently, the Austin comic wasn't a fan of 'Family Guy' and my impersanation of Peter Griffith wasn't funny to the less than fiunny gu. I think little ole me might have messed up his timing for the rest of his set. But in all fairness to the Blonde, if you get thrown because someone cheered for your hometown, you have more problems with your act than just timing. After that, I don;t recall the rest of his routine because I was too busy whispering loudly in Vaughn's ear about how bad the show was.

The third comedian was a chick with a gutter mouth. The only thing funny was the fact she hated Rachel Ray and she agreed with my yelp of Rachel being a 'glorified diner whore' who probably peddled more than just soup to get her own show.


It was all down hill


The comedians were sooooo bad that I wouldn't have been able to keep my mouth shut through any more and before it really got ugly with me entertaining myself with a few more vodka gimlets and a louder heckle job just to entertain myself ...we bailed.

I know it must take some real kahunas to get up on stage and try to juggle a routine that drops to the floor with a thud but comedy is one of those thangs that needs talent.

but Bless ya for trying.


Now get off the stage and get a real job!

The Blonde hates being bad!!