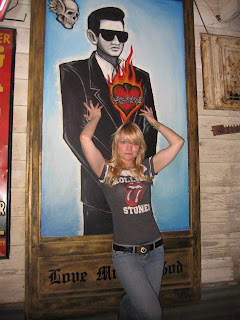 That is the official quote from Testes (official name: Esthus) the fish that came out of the water and spoke to Dallas and his friends one night. 15 years later on the same day, the statue of Dauie showed up mysteriously one night on Dallas' bed.

Ever since then, Dallas and his friends would take Dauie out on the town to celebrate 44 day.
Since Dallas was in town this weekend and could not be with his friends, I was the host of this auspicious occasion, even if I still don't know what the heck it means, spreading cheer and 'Happy 44 Day' to unsuspecting strangers that walked by us at the Mean Eyed Cat, a local bar that celebrates Johnny Cash.

Most of the folks that passed by just gave us queer looks and thought to themselves, their smoking the ganja...just keep walking. But a few stopped and asked what 44 Day was all about, mostly the ones that really were smokin the leaf, and thought they found a kindred spirit in my friend, and Dallas was completely pleased to be able to explain his day to anyone willing to ask.

I just sat smiling and shaking my head as if to say, " Its alright, he isn't dangerous, I just have to have him tucked into his padded room before midnight."

So Happy 44 day has passed and a few more folks have been inducted into the cult. I am fairly confident that it won't take the nation by storm considering you would have to believe in a talking fish. But for one day, I felt a bit more connected to people and that is something worth believing in, especially for a scoffinheimer like me.


The Blonde believes its all in good fun!!