'Mother' could not curb her appetite for murder even when children were around last week. She has been hording christmas cookies in an undisclosed location and upon there demise she set them down on the counter for the blonde's discovery.

If you will notice she set them down, in such a manner, as to make the cookies look edible. 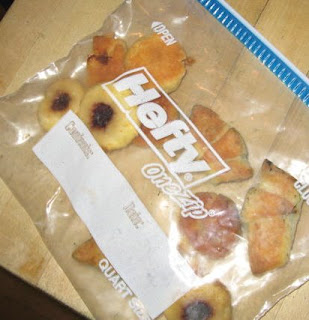 As you can see, the cookies look normal considering the blonde, whom did not have her contacts in, and in conjunction with early morning stammering without her morning coffee, she clearly saw decent cookies.

The blonde then on her second cup of morning coffee and with contacts in, decided to have another. As she reached for a cookie, she discovered a bad batch that was hideously hidden by the sheer manipulation of turning a bag over. 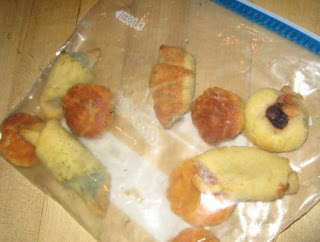 Clearly, you can see several cookies missing, that blondie ate, and with the bag turned upside down, you will see the mold infested cookies that were purposely disguised as an edible cookie by the defendant...AKA Mother.

The only defense 'Mother' offers; she claims mold is the organic version of penicillin in its purest form, and thus was trying to cure me and not kill me.

I feel this travesty has gone on far enough, and I ask everyone outside their glass house to rule in favor of the blonde.

Repeatedly trying to kill a blonde is an offense worth punishing. I ask for no leniency in this matter.

The Blonde rests her crumbling case!!