I Left My Heart in Santa Fe 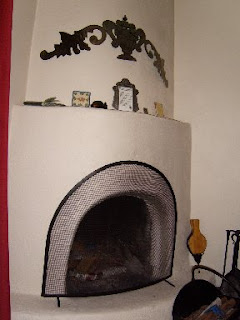 Sadly I had to leave my pilot and come home. My only regret is not having used the fireplace for a romantic ending. I was not sad to leave Santa Fe, but I could feel my throat choke up at the thought of saying goodbye to my wing man.

I left just as the snow began to blanket the desert ground. I thought to myself that without a private hot tub, balcony with a view, and my fly guy, I wouldn't have seen the the full beauty of the snow as I had it painted it in my head, anyway.

I reached Dallas just before traffic was to hit so I waited it out in a lovely story book diner before attempting my ride back to Austin. As I headed out to my auto, the cold front whipped at my hair like only the breath of Jack Frost can blow. I got into my mechanically plagued jag and headed south only to find Jack's fury escalated and he began spitting sleet. I had to pull over because when attempting to turn on my wiper, the thing flew off quicker than Donner and Blitzen and jetted 30 feet over the guard rail. I was not about to get out of the vehicle and scamper on the side of the highway for my blade so I engine crawled the car along the shoulder until the nearest hotel approached...well, the nearest nicest hotel approached. The hotel was very zen and after losing my heart and my wiper blade...I was only too happy to settle into sanctuary for one evening.

In the morning I took off for Austin only to have my steering lock up and I had to veer off the road to safety. Once again, I crawled my antiquity to the nearest station and recapped my steering and headed home. In Austin less than 10 miles from my house, a driver in a beat up-pick up side-swiped my old darling. As I pulled over onto the shoulder, the other driver hit the gas and took off. My jag, the poor girl began to cry and cry like only a British car can. I let her vent for a minute before pulling back into traffic, rolling along the last stretch of tar until we found rest at mi Casa de familia.

My British beauty needs a little more attention than most but I adore her and though we had a few troubles along our way, I just can't imagine giving her up for something new.