Go Back to India

My efforts to physically partake in the animal rescue has been thwarted.

No one is allowed on Galveston Island without official business. As a volunteer, I am not offically worthy!!

People were in line on the parkway for two hours before reaching a peace officer that bluntly told them to return from whence they came. They were not allowed in to see what has happened to their homes and their belongings. Its totally understandable their anger and frustration in this regard. The peace officer was also frustrated and in one instance he through a racial out lash at an Indian man in a minivan who was a little unruly.

Hey, we all have have had to deal with an unruly Indian man at one time or another whenever we have a credit dispute and our credit card company directs us overseas to deal with it but that doesn't make anyone want to throw disrespect their way.

Your a civil servant trying to keep the peace. If you can't handle being civilized in the midst of chaos, you don't deserve your badge!! 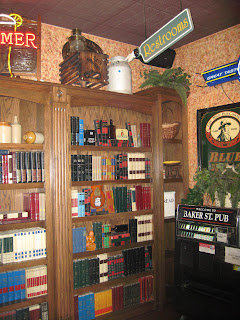 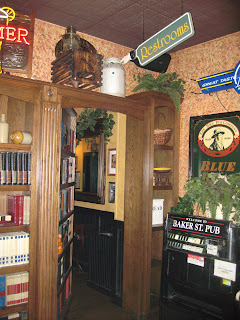 After dealing with a day long affair of bad juju in the air, it was time to blow off some steam at a local pub in the Woodlands.

After a few much needed Pinots, it was time for me to use the ladies lue. Imagine my frustration when I saw the sign pointing to a bookcase.

While I was waiting under the sign for some magical door to reveal itself, another patron came by and swung open the bookcase.

When I got back to my table there was a slue of peace officers obviously looking for someone. They headed to the restrooms and stood under the same sign as I did, looking just as puzzled as I did.

All I could think about is how ironic the situation was.

The Indian dude followed the signs only to be frustrated not to find a way in too!!

Blondes aren't the only ones that are dumb!!